The most ubiquitous image of Christine de Pizan (1364­–1430) is the author portrait (Figure 1 below) from a compilation of her texts for Isabeau of Bavaria, Harley MS 4431, fol. 4r (c. 1410–1414, fig. 1). It is an emblematic of Christine’s social station and role as author. The trappings indicate a sumptuous domestic interior with a high-backed scissor chair, diamond-paned lead window, tiled floor, and vermillion tapestry in the background. She is dressed in an elegant blue gown and adorned with a fashionable horned headdress, draping gauzy white linen. She is actively writing, inkwell to hand, with a patient pet dog at her feet. She is framed by decorative architecture in forced perspective, compressed and fanciful. Traditional author portraits such as this are nearly as old as manuscript production itself, as witnessed by the classically inspired illustrations of the four evangelists in late antique texts.[1] The typical formula for an author portrait includes a vision of the author at work before a lectern in an architectural frame, surrounded by pertinent inferential symbols. The portrait of Christine therefore conforms to author portrait conventions: she is active and alone. The current consensus in academia and beyond of Christine reflects this image of her: she is active and alone in fifteenth-century literature as a singular feminist, practically unique. Passages in her texts also echo this image, such as in The Book of the Path of Long Study: “One day, in order to lament alone in this fashion, joyless, I shut myself away in my little study, where I often enjoy myself by reading texts recounting various adventures.”[2] This is also often how readers are introduced to Christine, primarily through reading texts shut away in a little study, or if lucky, perhaps in a classroom. 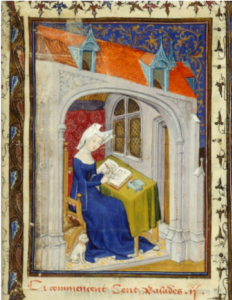 Suzanne Savoy’s extraordinary one-woman play, Je Christine, takes this famous two-dimensional portrait of Christine de Pizan and animates it, in the root sense of the Latin word anima, meaning to bestow “life” or “soul.” In the performance, Suzanne sweeps onto the stage as a vision of Christine in royal blue robes and snowy headdress, as if Christine had stepped outside the architectural frame of her author portrait, ready to address an audience. It was in this dramatic re-telling of Christine’s life at the Gilmore Theater at the University of Western Michigan that I first experienced Christine’s words externalized outside my own mind. Taking Christine’s texts beyond the silence of the library and onto the stage to experience with an audience, invoking laughter and sometimes tears, was to meet Christine anew from an exciting perspective.

All studies in the humanities are a discourse, and I wanted to share this revelatory experience of Christine de Pizan with my students and colleagues at Brigham Young University, to spark a dialogue. This desire eventually blossomed into a collaborative, interdisciplinary symposium, “Women’s Voices of the Middle Ages & Renaissance,” held on campus in March 2020, with a Friday evening presentation of Je Christine. Scholars from around the United States brought their work out of their silent studies and animated them with their own voice in a collaborative setting. It was only due to pan-collegiate cooperation and generosity, under the direction of Valerie Hegstrom, Jennifer Haraguchi and Bob Hudson, that Suzanne Savoy did perform Je Christine in the Education in Zion Theater on 13 March 2020. The ensuing dialogue between students, faculty and even children from a French dual-language immersion program, was lively and enriching. The collaborations and presentations of the symposium strengthened collegiate ties, intriguing ideas were discussed, and even resulted in new friendships.

One of my tasks in preparation for Suzanne’s performance was to set the stage with appropriate props, to make every effort to evoke the setting in Christine’s author portrait. I was granted permission to venture into the labyrinthine backstage storage of the university’s theater department. Having little theatrical experience myself, exploring the floor-to-ceiling, room-after-room of stage props was outright fun, if overwhelming.[3] With guidance from a stage technician, I hunted for a high-backed scissor chair, a lectern, and appropriate textiles. I emerged from the cave of wonders with nearly everything necessary, if perhaps not an obliging canine. The effect on stage was transporting and evocative, and when graced with Suzanne’s portrayal of Christine, it indeed felt like rare glimpse into a fifteenth-century study.

The devastating coronavirus pandemic was only a specter of disaster in those early days of March, and no one involved recognized that this was the last in-person symposium of 2020. Currently, online conferencing and collaboration allow only truncated portraits of today’s writers and scholars, flattening speakers into two-dimensions on rectangular screens. A similar kind of airless compression has also, I argue, plagued Christine de Pizan’s writings. In her most famous portrait she may be alone in her study, truncated and compressed, but most of her writings were the result of communication with others, either with metaphysical personifications like Reason or Rectitude, or with flesh-and-blood contemporaries, as in her heated correspondence with Jean de Montreuil, or discussions with luminaries of the University of Paris. She only discovers wisdom or truth through collaboration and guidance from others. As singular as Christine certainly was, her work is evidence of intellectual and artistic discourse with the past and her present. Externalizing her voice, representing Christine as a real person with a dynamic human soul, together with an audience and accompanied by lively discussion is perhaps the best way to approach an author of her caliber. The symposium, and especially Suzanne’s performance, animated the kind of discourse so critical to the humanities, and enriched all who participated at Brigham Young University and beyond.

[3] The author of this introduction teaches Art History as an adjunct professor in Comparative Arts and Letters at Brigham Young University. Her master’s thesis examines imagery in Christine de Pizan’s texts in relation to The Lady and the Unicorn tapestries and gender studies. She is currently applying to doctoral programs, this time a student of Geoffrey Chaucer’s writings and medieval astrology. Contact her at: shelley_williams@byu.edu.